The sweet potato is not related to the ordinary potato. The sweet potato is the underground part of a species from the Convolvulaceae family, namely Ipomoea batatas. The plants from the morning glory family have scattered leaves along the stalk and regular five-part flowers: five corolla leaves, five sepals and 5 or 10 stamens. Known plants from this family in Western Europe are the species from the genus Convolvulus, the field bindweed (C. arvensis), shore bindweed (C. soldanella), hedged bindweed (C. sepium) and great bindweed (C. sylvatica). It is a cosmopolitan family that counts about 1600 species. Approximately 300 to 500 species are counted among the genus Ipomoea. Like most plants in this family, they are climbers. The striking saucer-shaped flowers of the plants from this genus are usually open for one day, which is why they are also called dayflower. Many species from this genus are also cultivated as ornamental plants, such as the purple morning glory (Ipomoea purpurea). On many tropical beaches you will find the goat's foot (Ipomoea pres-caprea), a creeping plant with leaves that resemble a goat's hoof. This plant spreads over the seas because the seeds stay afloat. He can carrot on every stem knot, so he can record the sand well. 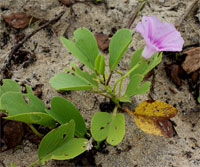 Leaves as a vegetable

The sweet potato (Ipomoea.batatas) originates from South America. By the Spaniards and later the Portuguese brought this food to Southeast Asia, where it became an important food crop. In Polynesia and New Guinea they already knew the sweet potato. He may already have been introduced there before on the Pacific.
In the Netherlands, sweet potato, which naturally thrives only in tropical and subtropical regions, has not eaten much, although it is becoming increasingly popular. In the Surinamese kitchen the sweet potato is an important product. The largest producer of sweet potatoes is China, where about seventy percent of all sweet potatoes are grown in the world.
The sweet potato has heart-shaped leaves on its long stems, which are sound or lobed. The shape of leaves can vary greatly. The leaves can be eaten as leafy vegetables and contain a lot of vitamin C. The large bell-shaped flowers appear in the leaf axils, which have a gradient from white to purple.
The sweet potato forms tubers at its roots, in which reserve food is stored from which the plant can grow up again later. This food source is almost exclusively vegetatively propagated by humans. The tubers are variable, the skin can be white, yellow-orange, brown or purple. There are also differences in sweetness. After harvesting, the sweet potato has a limited shelf life. That is why self-sufficient farmers harvest only a small part of their tubers.

All species of Ipomoea have no starch as a reserve food, but inulin. Inulin is a polysaccharide made up of fructose units. This is in contrast to starch, which consists of several glucose molecules. Inulin can not be broken down by the enzymes in the mouth and the small intestine (amylase). The breakdown of inulin starts only in the large intestine, where some bacteria secrete enzymes that can break down the large molecules into fructose. The digestion products of the sweet potato are therefore absorbed later than those of the ordinary potato. According to some, that would be better for diabetics. The use of sweet potatoes stimulates the growth of bacteria that convert the inulin and thereby changes the intestinal flora. The sweet potato also contains small amounts of sugar raffinose, which can not be broken down in the mouth or small intestine. Like inulin, it is broken down by bacteria in the large intestine. The degradation products of the bacteria involved in the conversions of inulin and raffinose include hydrogen and carbon dioxide. This gas production can lead to flatulence (flatulence) in some people. The shapes of the sweet potato with yellow or orange meat also contain a lot of vitamin A.

You can find many dishes with sweet potatoes on the Dutch Albert Heyn supermarket website Allerhande. The sweet potato can be used in both sweet and savory dishes.

In the Hortus Botanicus of Amsterdam you will find the sweet potato in the butterfly greenhouse.

This page was newly created on Wednesday, January 24th, 2018.

For additional information or comments, please email me: